Visit the Holy City of Nazareth on your Israel Tour

Nazareth is locate inside a bowl atop the Nazareth ridge north of the Jezreel valley, and was a relatively isolated village in the time of Jesus with a small population of less than two hundred people.

Today Nazareth welcomes thousands of pilgrims from around the world and is home to more than 60,000 Israeli Arabs, and Upper Nazareth is the home for thousands of more Jewish residents.

There's no question Nazareth holds a special place in the heart of all Christians, and is a regular stop for all Holy Land tour itineraries. Home to the largest church in the Middle East, the Church of Annunciation is built where it's believed the angel Gabriel announced the news from God, that the Virgin Mary was pregnant with His son.

Besides the New Testament, Nazareth is never mentioned until the Byzantine era, therefore very little is known about Nazareth from ancient history. Excavations have however confirmed the town was only a small agricultural rural village during Hellenistic and Roman times. Nothing in comparison's to it's neighboring large city of Sepphoris during Jesus times, yet because Jesus grew up and had His childhood here as written in the New Testament, you'll find Nazareth today to be a thriving large city, while Sepphoris is now only an archaeological site.

Nazareth the Holy city is home to hundreds of monasteries and churches belonging to several different Christian denominations. It's a top destination for Christian pilgrims on their Israel tours to the Holy Land due to the important event which took place here in the New Testament, so much that in fact nearly all shrines and Churches in Nazareth are named after and commemorate the biblical events of Christ's life and the miracle of the Annunciation.

A Byzantine church was constructed over where it's believed that the angel Gabriel announced the good news to Mary.  In 1966 the Roman Catholic Church began building a new basilica over remains of an older one, and today the Church of Annunciation is the largest church building in the Middle East.

The Rejection of Jesus is also another important Christian event in the scriptures that took place in Nazareth. Jesus spent his boyhood years in Nazareth and began His ministry around 30 years of age. After moving to Capernaum, by the Sea of Galilee, Jesus returned twice to teach in the synagogue of Nazareth, but was rejected both times.

The city of Nazareth is a unique destination for Holy Land pilgrims due to being the largest Christian Arab populated city in Israel, and being the home to a variety of monks, clergymen from different denominations from all over the world who come to live in Nazareth for worship and service in the Holy Land.

With its unique and Christian history, the city of Nazareth is a distinguished destination and a must see Holy Land Tours destination when touring in Israel. 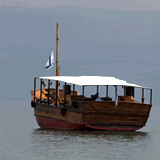 General Information that is Good To Know when Traveling to Israel

How to plan your Israel trip? - Things you shouldn't miss

The Garden of Gethsemane in the Holy Land